Can you remember being 15? 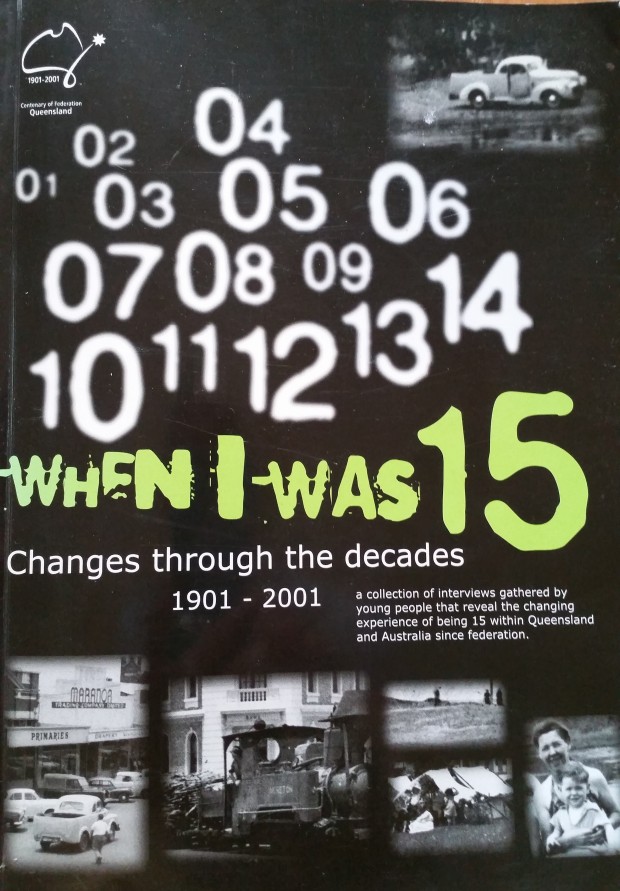 When I think of my teenage years I think of hanging out with friends, walking everywhere (or sometimes riding our bikes), laying in the sun for hours to get a tan, eating junk food, and wanting to be anywhere else but in school.  I also remember wanting all the new fashions (this was the 80’s!!) and looking back now I can’t imagine why anyone would want to wear such gaudy stuff ha!.  But yes, those were the 80’s, which really is not so long ago, not in the genealogical world anyway.  However, if…many years ago…you were to ask someone who was born just after federation, in the early 1900’s or 1910’s, even up to the 1940’s…they will paint such a different story about their teenage years.  I have a magical book on my shelf called “When I Was 15 – Changes through the decades 1901-2001”.  It is full of interviews gathered by young people across Queensland, jointly published by the PCYC (Police-Citizens Youth Club), Queensland Government and State Library of Queensland.  Reading through the pages makes me want to listen to these people’s voices as they recount what their experience of being 15 was like.  Here are a few snippets:

Where were you born – I was born in the West Indies on an island called Curacao.

Where did you live when you were fifteen – In Bundaberg

When did you migrate to Australia – I was only three, so it would have been 1951.  Both my parents were Dutch and my older sister Liz was born in Holland.  My father got a job with the West Indian Airlines; he left first then my mother followed a couple of months later.

Why did you come to Australia – Someone told my father there were wonderful opportunities here.  Then they got here and there were no jobs at all.  All they could get was shovelling sugar into sacks in Gin Gin.  They lived in Gin Gin for quite a while with people who owned a cane farm.  And it was hopeless; they couldn’t talk a word of English and had no money.

Can you describe a memory of a typical school day when you were fifteen – I was in Grade 10, which is very similar to what it is now.  With a lot less kids I suppose.  I went to Bundy High.  I rode my bike to school from out past the aerodrome; we lived on a farm in those days – a pineapple farm.  Mum used to ride to town every day on the bike.  I suppose we left at 7:30; it didn’t take long, maybe half an hour to three quarters of an hour.

What sort of technology was available to everyone when you were fifteen – Typewriters were in then, but not computers.  No calculators either.  Blow dryers weren’t in then; we just had the ordinary plastic cap thing that you stick over your head.  I don’t think my mum had a vacuum cleaner.  When I was fifteen we used to have a bath with a bucket of hot water.

Is there anything else that you think has dramatically changed since you were fifteen – Technology is really different.  The kids are allowed to do a lot more and are doing a lot more.  They’re allowed to go out much younger than we used to.  They’re living by themselves a lot younger.  Fifteen year olds are much more worldly today and they are also much more educated.  Home life is basically the same.  But with cars…kids today get a car when they turn seventeen.  We never did, we rode a pushbike until we were twenty.  Then if we were lucky and we had enough money, we’d get a car.

Where were you born – Geelong

How was your experience of being fifteen different to the experience of fifteen year olds now – Being fifteen then, I think, was a luxury.  During the years that I was born and the years that I lived between 1920 and 1940 it was a very, very hard place to live in, in Australia.  There was a depression and no one had any money especially the working people.  The only people with money were the people who had jobs like doctors or dentists or something like that.  They were lucky to get paid because nobody had any money.

Describe a typical day at school when you were 15 – I wasn’t good at school, I left when I was 13 with all my certificates…then I carried what they called a bluey which was a sack on your back and I went looking for a job around Victoria.  We walked everywhere.

What were the work opportunities available to you at 15 – Well, there was no work at all.  I did get a job dragging wheat bags to the wharf – chasing mice off the wheat trucks and getting them into the water; I was 13 at that stage.

What was social life like – Social life, I didn’t have any.  I had four sisters; three were older than myself.  I used to go with them to a dance of a night – they taught me how to dance.  I walked home with them ’cause they weren’t allowed boyfriends.  They were girls of sixteen – seventeen years of age.  I don’t think there were limitations.  If you wanted to do things you could as long as it was respectable and up to 15 years of age I went to Sunday school.

What were your hopes and fears at the age of 15 – My hope was to get into a business, which I did so when I was about 30/31.  I feared that I wouldn’t get much food.  I’m not kidding either.  Everybody had visions those days, but there was no use having vision, as there was nothing to have vision with.  Everything seemed at that stage of life that you were just a number.  The war was a big influence in my life because that was when things started to open up a little bit and you could move around a bit because you had somewhere to go.  I joined up with the Air Force and I was working as a top executive at the woolen mill and we were making army uniforms and that ‘s why I had to stay.  I stayed in that woolen mill until 1945 and then I decided to get out into business (scrap metal) on my own.  My ambition was high when I was young but only started to materialize after the war when things were different.  The war generated a lot of work, people who never had a job prior to the war finished up working.  Mind you they were lowly sorts of jobs…very lowly paid.